Referencing the popular Browning Hi-Power semi-auto pistol design, the Girsan MC P35 single-action 9mm brings all of the expected performance, reliability, and accuracy of the original but is updated and priced for today’s American sport shooter.

Cocoa, Fla. (August 2021) –  EAA Corp., importers of select quality and affordable handguns, rifles, and shotguns, in conjunction with their partner, Girsan, are pleased to bring one of the most recognizable pistol designs back into production with the new MC P35 single-action, semi-automatic 9mm pistol.

Made with serious respect for the original Browning Hi-Power® pistol design, EAA’s MC P35 pays homage to one of the most widely used military handguns in the world, with its classic styling. Built on a steel frame and slide in a black matte finish, the MC P35 boasts a 15+1 capacity in a staggered column magazine. Originally designed as a military pistol, the Hi-Power® necessitated extreme accuracy and the Girsan MC P35 does not disappoint. The short recoil 9mm, 4 5/8” barrel, along with the slide, allow for quick second shot resets, getting the shooter on target faster. The rear sight is a windage drift adjustable sight and the front is a dovetail sight. The traditional slim trigger allows for a short trigger reset and is accessible even while wearing gloves and the serrated ring hammer provides a positive grip while cocking. Enhanced external controls include external extractor, ambidextrous safety, and magazine disconnect safety.

EAA and Girsan bringing back one of the most iconic pistol designs in the world with the  Girsan MC P35. MSRP is $528.00. 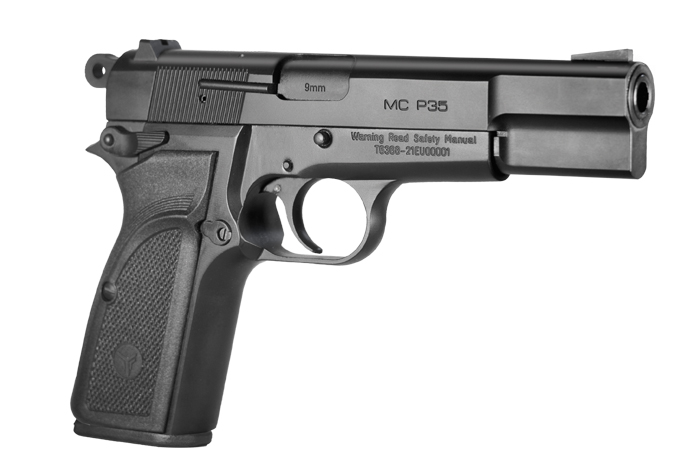 Based in Florida and founded in the early 1990s, European American Armory Corporation (EAA Corp.) has brought value to firearms owners with an array of right-priced, affordable handguns, rifles, and pistols from respectable international manufacturers. EAA Corp’s mission has always been “good quality products at reasonable prices.” www.eaacorp.com